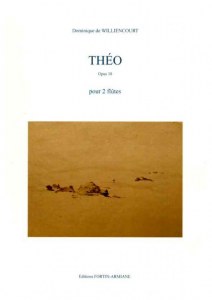 opus 18
for two flutes
Duration : 5 mns
Back from Japan, especially Kyoto, while cherry blossoms were blooming all over the country, I wanted to pay tribute to the victims of the 2011 tsunami that plunged the Empire of the Rising Sun into mourning.
The discovery of gardens but also Buddhist, Zen or Shinto temples influenced me to create a work of contrasts, calm, spirituality, but where the sudden storm can seize with fright.  In the face of adversity, I have learned compassion which recalls the absolute awareness of mercy.
The flute represents the Japanese spiritual musical instrument par excellence. The two artists struggle and find themselves in contemplative prayer.
The premiere took place in Tignes (38), Musicalp, on Sunday, July 28, 2013 with Jean Ferrandis and Nana Onosuka, to whom I dedicate this piece as well as to my godson Theodore de La Roncière.
Dominique de Williencourt